Kitchen shears are unlike normal scissors. They are more heavy-duty and can take more cutting force. However, many people often overlook the benefits of shears. You can use them for heavier cutting than scissors, like cardboard, heavy fabric, and items in the kitchen. Shears can cut apart bones and meat or tough herbs and vegetables. Plus, if you want to do a great job on pizza, shears are your go-to kitchen tool.

In this article, we discuss how to use scissors and shears, including why you shouldn’t use regular scissors in the kitchen. So, let’s dive in!

Uses of Scissors in the Kitchen 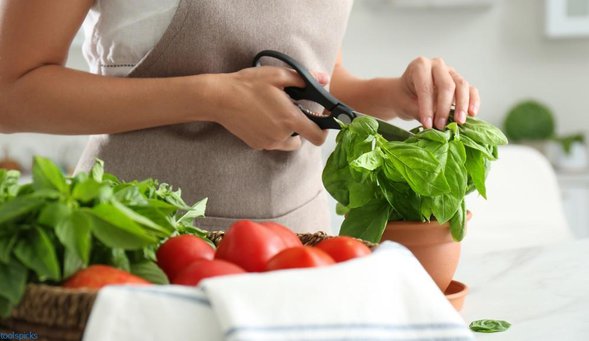 You can use scissors for simple things in the kitchen, like opening boxes or snipping vegetables. However, not all scissors are strong, so you need solid stainless-steel scissors for more challenging jobs, like cutting a chicken, bones, and hard vegetables.

Uses of Shears in the Kitchen

If you want to put fresh basil leaves in your meals, you’ll find that cutting them with shears is very practical, but these twigs can be delicate and tear when you cut them.

Cut the leaf off with kitchen shears rather than separately. This way is how the pros do it.

Have you ever struggled to cut dry apricots or prunes? Then you know how tedious and time-consuming it is to cut dry fruits. You can’t even chop them well in a blender or food processor. Kitchen shears are an excellent choice in this scenario.

Use kitchen shears or poultry shears instead of a big chopping board and a knife to cut meat like a pro. To get clean cuts for roasting chicken in less time, place the chicken horizontally on the counter and start cutting. Kitchen shears save you time and won’t make a big mess.

You can also use them for cutting fat from mutton, trimming chicken and duck wingtips, snipping uncooked or roasted chicken into small pieces, removing fish scales, and snipping lobster tails.

New parents look forward to when their young kids start eating regular foods, but you have to ensure everything is bite-sized when it’s time to move on to finger foods. Simply use shears to snip everything from apples to hot dogs into bite-size chunks.

Cooking new dishes is fun and easy when using kitchen shears to cut bread and other baking items. For example, you can easily make burrito dips and chip dips with kitchen shears.

You can even use shears to separate lasagna sheets, trim layers of tortellini, cut portions of pasta into shorter lengths, or even cut uncooked ramen.

You don’t have to remove all the grapes from their stems to divide the bunch into even portions. Instead, use kitchen shears to cut the grape clusters into portions for party snacks.

Cutting chilies with kitchen shears is quick and easy, but it can leave spicy residue on your fingertips. Always wear gloves before slicing them to prevent any unexpected skin irritation.

Cut excess dough from the edges of your pie pan instead of tucking it in or use your shears to cut biscuit dough into smaller pieces of your choice. You can refrigerate this biscuit dough for future use.

Removing shrimp shells is easy with kitchen shears. Simply insert the tip of your shears between the shell and the shrimp, and trim through from behind to the tail. Then, carefully remove the rest of the shell with your fingers.

Kitchen shears can cut through the pizza crust quickly without making a mess. Plus, the cheese won’t stick to them, so you don’t have to worry about any toppings sliding off.

Using kitchen shears to cut the pepperoni into smaller pieces is more straightforward than a knife. Kitchen knives are more time-consuming and also require a cutting board.

Ways To Clean Your Kitchen Shears You should clean your kitchen shears after every use to avoid cross-contamination and eliminate any bacteria. If you use the shears to trim acidic foods like limes or chilies, you should wash them right away. Waiting too long to clean them for a long time can cause the shears to dull.

Kitchen shears are not dishwasher-safe, so avoid putting them in the dishwasher because it could result in dulling of the shear blades. Likewise, you should also avoid cutting iron scrap metal or rigid sheets with the kitchen shears to keep the blades sharp.

To clean your shears appropriately, use a soft absorbent cloth to wipe them clean using dish soap and water.

Then, let the kitchen shears dry. Most kitchen shears are carbon metal rather than stainless steel or hybrids, so they are not very rust-resistant. After they dry, rub on a light coating of edible oil to protect them from oxidization.

Kitchen shears and scissors are essential kitchen tools and help beginners and professionals get tough cutting jobs done. They work smoothly and quickly, and most models can be used by both right and left-handed cooks.

We recommend that you look for shears if you use various fresh herbs, but as you can see, there are endless uses for kitchen shears or scissors. Don’t just grab your hair cutting shears or fabric shears when you need sharp scissors in the kitchen. If you like to cook or often prepare meals for your family, the best kitchen shears are an inexpensive and worthwhile investment.